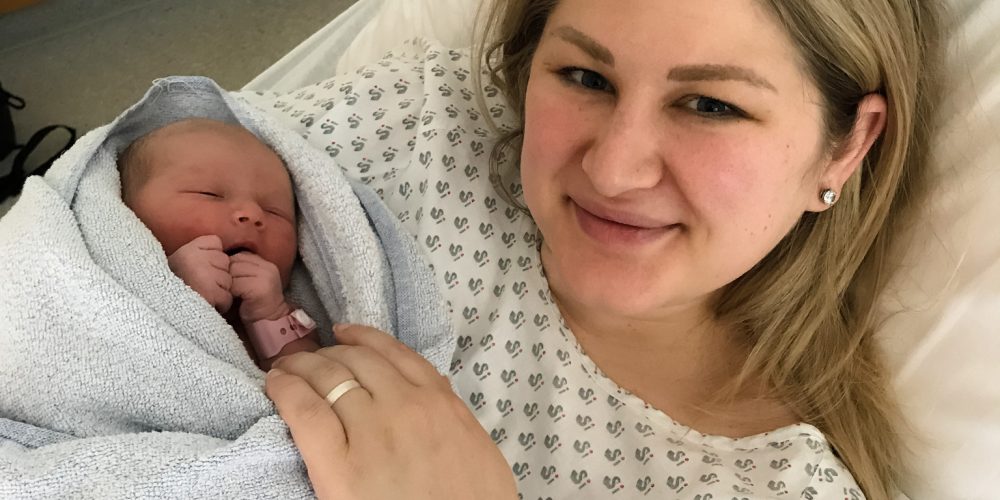 I am so excited to share my birth story with all of you! It was certainly a crazy 9 months, from constant nausea and throwing up, to intense heartburn and making an international move at 32 weeks – everything led up to this!

I tried to go back to sleep but wasn’t able to, so I laid and rested until about 6am when I got up for the day.

We were supposed to go see a physical therapist at 8:30am for my back but since the contractions had remained for a few hours, we decided to cancel that appointment.

At about 9am, the contractions stopped for about an hour. This stressed me out because I was worried that I was just having prodromal labor again and that it wasn’t actually the real deal.

However, they came back around 10am and we had an appointment with our OBGYN at 11am. There they did the routine CTG and she was able to see the contractions I was having. For me, I only felt them about every 15 minutes but the CTG was showing they were coming more often than that. She was certain that they baby would arrive either that day or the next – this was super exciting and encouraging!

We wanted to try to wait as long as we could before going to the hospital so that Manuel was actually allowed to come in with me. Since we were in the process of moving, we went to our new place and tried to get some things done. I did some unpacking and tracked the contractions. They kept coming at closer intervals – and around 5pm, they were about 5 minutes apart and lasting for about 45 seconds. Manuel and I headed back home to eat dinner and prepare the rest of the hospital bags.

After dinner, they were getting really strong so I decided to take a shower. At this point I was just trying to listen to my body, but Manuel wanted to keep tracking the contractions so he was “secretly” trying to do so every-time I stopped to focus on my breath.

After I showered and finished packing, it felt good to just pace back and forth, then stopping to breathe when the contractions hit. They were about 4 minutes apart, lasting over 1 minute and this had been happening for about an hour.

Manuel wanted to go to the hospital but I was so unsure. I wanted to make sure I was in established labor so that we wouldn’t get sent home again.

Ultimately, we decided it would be the right time to go since we had about a 30 minute drive to make.

Upon arriving to the hospital, around 7:30pm, I was pretty stressed that they wouldn’t let Manuel in until they established I was in labor due to Covid-19 restrictions. However, when the women at the front desk saw me, I think she knew that it was time and allowed both of us to go to the birthing unit.

Luckily, the birthing unit was fairy quite and not very busy so we were immediately given a room and had a CTG set up for 30 minutes. Followed by an ultrasound with the doctor. During this time, Manuel and I worked on my breathing and trying to remain relaxed between the contractions. And, I didn’t have to wear a mask while I was in the room, only if I left the room.

After the 30 minutes was up, they did a cervical check and I was shocked to find out that I was only 1cm (which I had been for about 2 weeks). The midwife seemed a bit shocked by this too since my contractions were coming every 3 minutes and were pretty intense.

I figured that she would send us home but she allowed us to stay and allowed us to go walk around the hospital to try and help things progress. Walking really ramped things up even more at which point we returned to the room for more CTG monitoring.

Manuel and I had planned to try for a natural birth, and we had done a lot of preparing in order to try and make this happen. One of the things that I wanted to try was to labor in the water. The midwife set up the tub for us, and I was able to get in and that felt amazing. It helped relieve the pain a bit and made moving positions easier. We turned off the lights, and played classical music to help me relax.

While in the tub, the contractions were coming back to back, and were causing me to moan through them. The midwife and Manuel were super awesome in coaching me and reassuring me that I was doing what I was supposed to.

I started getting really hot and wanted to get out of the tub, and the midwife wanted more monitoring and to check my progress. It was difficult to even walk back to the room a few feet away because the contractions simply had no breaks in them.

Once we were back in the room, and the midwife checked me, I was only dilated to 2cm. I was pretty devastated by this news.

According to the midwife, the CTG was measuring contractions that were the strength and frequency of someone at 8-9cm. I guess that due to the fact that I had a LEEP procedure done a few years ago, my cervix wasn’t dilating as it should. The midwife said that she has seen this happen, and that my cervix could “break” open at any time but it could also make labor much longer and more intense until it did break open. She recommended that we consider an epidural.

It was honestly such a huge relief after this. I finally felt like I could relax and I welcomed the break.

Not too long after I got the epidural, I starting having an acute sharp pain on my left side. It was so intense that I started vomiting. The midwife called in the doctor who immediately did an ultrasound to make sure that my placenta hadn’t detached. The good news was that it hadn’t and the pain soon subsided again.

My blood was drawn again at this point because a few of my numbers had come back elevated. Once they retested my blood, it was determined that I needed to be started on antibiotics because a few of the numbers were still concerning – and although they didn’t effect me, they could effect Leonie.

I was able to rest after this, and Manuel got a bit of sleep too. Then around 5:45am, the contracts were coming back pretty strong (even with the epidural). And at about 6:00am, I felt a shift in the contracts and my body felt the need to push. Getting the ok from my midwife, I was allowed to push when I felt like it.

I pushed for about an hour with just Manuel and then the midwife and doctor came in to assist. The midwives were changing shifts at 7am and our lovely midwife decided to stay to help me birth my baby. Which meant that we had two midwives helping me – this was so nice.

Pushing was unlike anything I have ever felt. It was intense and overwhelming. Many times it felt like I couldn’t do it. However, with the coaching of Manuel and the team, we welcomed Leonie Elizabeth Fichtl into the world at 7:08am. She weighed 6.5 pounds and was 20 inches long.

Her cord was wrapped around her neck three times, and when she came out it was already white. Which is why I had such a hard time pushing. However, she was totally healthy.

Manuel was able to cut the cord and I got to do immediate skin to skin. The doctor helped me birth the placenta, which came fairly quickly and checked me for tears. I was super lucky and didn’t have any tears or need stitches.

I can’t explain the overwhelming emotions that I felt when I got to see my baby for the first time. It made the past 9 months completely worth it. She was so gorgeous and Manuel and I couldn’t stop staring at her.

She was able to latch on during the golden hour and I breastfed her for the first time before we were moved to the next room. Once we got into the room, Manuel had to leave due to the COVID-19 restrictions.

This was a bit scary because I was left alone with a new baby but the nurses were all incredible- they even made a huge effort to speak to me in English which was so greatly appreciated.

Manuel was able to visit once per day, and right at about 50 hours we were allowed to take our baby home.

Overall, I am so happy with the birthing experience. Even though it didn’t go the way I had planned, and we were in the midst of a global pandemic, everything worked out well in the end and God gifted us a beautiful baby girl.

How to Survive the Third Trimester 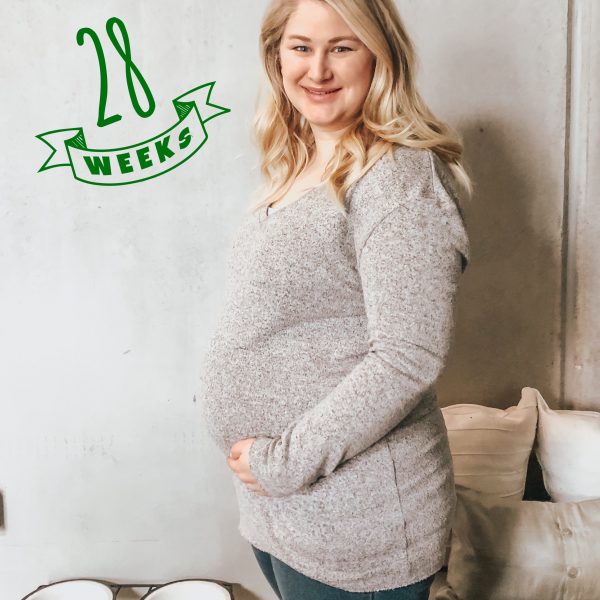 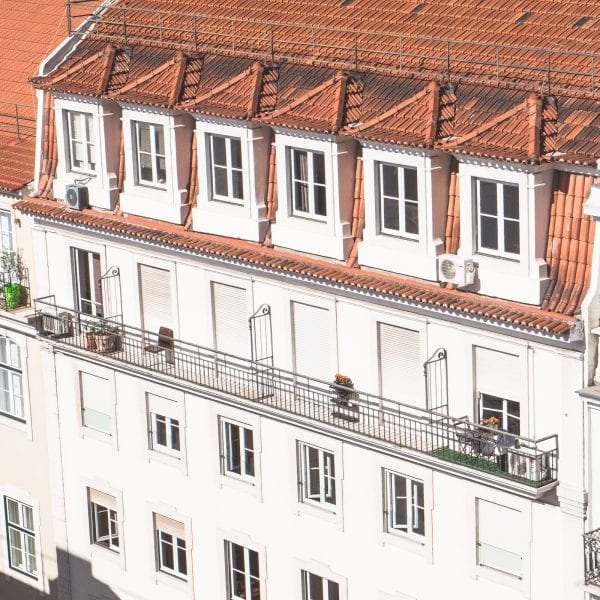 Start Your Day In A Positive Way 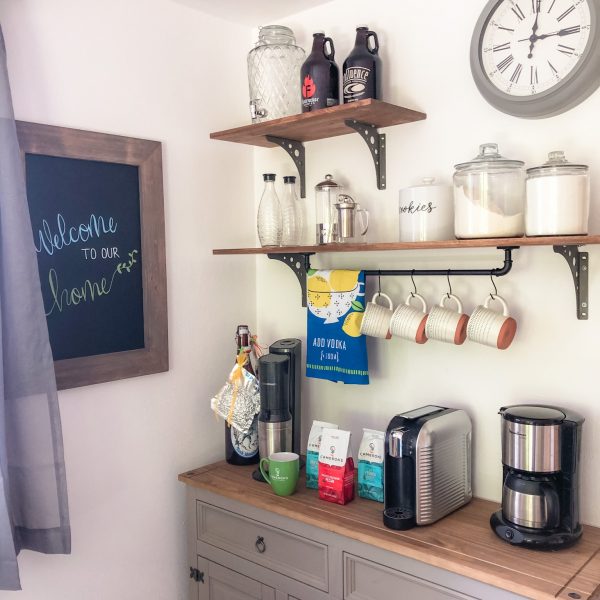